Have you ever had Pho soup?
Right now it seems to be the it thing, but I’ve enjoyed this soup for quite awhile on cold winter days at our local vietnamese restaurant.
It is very flavourful broth type soup that can sometimes, if you do not ask, have quite a bit of heat to it.
I myself do not like things overly spicy. I like spicy. I use Sriracha all the time and chiles in my cooking but I do not want to tear up when I am eating.
That’s too spicy for me.
Pho soup seems to have so many different ingredients in it but I wanted to find a way to make this soup easy to do.
Yes, the ingredients are a bit unusual but most of the ingredients can be found in the grocery stores now.

I’ve ** the ones that are harder to get. I found them at an asian grocery store in my area.
This base of this soup is made in a slow cooker and once the broth is finished cooking this soup takes no time to serve up.
I used leftover chicken breasts that I had in the fridge and the rice noodles only take minutes to prepare.

If you want a low carb or paleo option for this soup I found sweet potato starch noodles in the asian grocery store. They taste great and are so much lower in carbs than regular rice vermicelli noodles.

I do hope you give this recipe a try

I like salads!
In fact I could eat salads almost every meal, well, not for breakfast normally but definitely for lunch and supper. (I even have my 27 favorite salads available in my cookbook.)
I really like salads that will last in the refrigerator for a couple of days too and how I normally do that is by putting them in canning jars.
You can fill them to the right portion size that you want, put the lid on and grab and go.
Basically just give the jar a bit of a shake and it is a good as when you made it.
This is one of those salads.
This salad would be great for a bbq or picnic in the summer too.
No mayo or dairy ingredients that you have to worry about in the summer heat.
Barbecue up some chicken breasts or steaks and all you really need is this salad to go with it.

Tried this recipe?Let us know how it was!
BBQ lentil picnic quinoa rice salad wheat free

These easy to make gluten and dairy-free cinnamon buns are delicious and don’t taste like they are gluten-free at all. I love when I share a baked goodie and no one knows it is gluten-free. A win win for sure! This recipe is a biscuit gluten-free dough-no yeast required.

You can easily make this recipe in the morning and enjoy warm gluten-free cinnamon buns for breakfast. These cinnamon buns are gluten, dairy and yeast free. This recipe was originally written and posted Feb 9 2015. I have taken new photos and updated the written post.

Basically you are making a biscuit type dough, rolling it flat, topping with brown sugar and vegan butter and rolling into a jelly roll shape.
Then all you need to do is slice, place in a baking pan and bake.
Easy right?

Homemade gluten-free cinnamon rolls that are soft, fluffy and oh so delicious. There really is nothing better than a warm and gooey cinnamon bun.

With no yeast in the gluten-free cinnamon bun recipe there is no waiting for dough to rise. In the recipe I used goat milk, for I am not able to handle cow dairy right now. You could substitute coconut milk if you are wanting a plant-based alternative.

This recipe is easy to make and I know everyone will love them. No icing is needed with these cinnamon buns. I sprinkle brown sugar and cinnamon on the bottom of the pan before I add the rolled buns. Then pour a bit of goat milk over the top of the buns before baking. Once the buns are baked you will have a decadent caramel topping on them.

THE INGREDIENTS NEEDED TO MAKE THE CINNAMON BUNS:

I grew up with cinnamon buns regular appearing for breakfast. I am thrilled that I was able to create a yummy gluten-free version of a childhood favourite. These gluten-free cinnamon buns are soft, gooey and totally irresistible. The square pan definitely does not last long in my house.

HOW TO MAKE THE CINNAMON BUNS:

What is better than delicious, freshly made gluten-free cinnamon buns right out of the oven? Cinnamon rolls are one of those baked goods you crave once you are gluten-free. Especially if you go to the mall and pass by a Cinnzeo bakery. All you think about after is cinnamon buns.

Thankfully, you now have an easy gluten-free recipe that you can make at home.

HAVE ANY GLUTEN-FREE QUESTIONS? Please DM me if you have any questions about gluten-free baking or cooking. 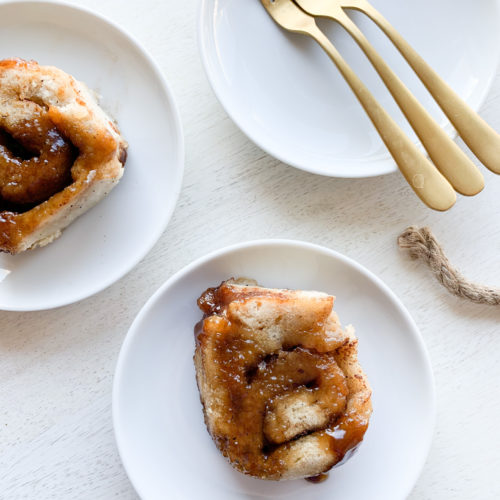 Here it is… the recipe for gluten free spring rolls.
I recently posted the question on Facebook on what should be my next recipe. (Be sure to join our Facebook community here.)
Should I do gluten free spring rolls or pizza pops?
The winner was gluten free spring rolls. I will put the recipe for gluten free pizza pops in the cookbook I am working on.
Making these spring rolls is not difficult, HOWEVER, they do take time. What is MOST important is to have all ingredients prepped, have your rice paper soaking area ready, your filling and rolling area prepped, and your deep frying area ready.
If you are not organized in those areas, you will find making these spring rolls more frustrating then it needs to be.
Now is this a recipe that is quick and easy?
I would say no. It’s not that this recipe is difficult but there are many steps involved.
The deep frying process also takes time so I might not suggest this as a quick supper.
With the old school spring rolls that us gluten free folks cannot eat, egg roll wrappers are used. Honestly, the rice paper wrappers that I use for the gluten free spring rolls are more delicate than the egg roll ones. Keep that in mind if you used to make the old ones and now are using the rice paper wrappers.
Because of the thinness of the wrappers I found the wrapper fried up very quickly, in fact, the inside was not fully cooked so I finished them off in the oven. You could cook the filling before hand instead of the raw like I did. This way you could skip the oven step.
I think I will do that the next time I make these.

Tried this recipe?Let us know how it was!
asian gluten-free Rolls spring springrolls wheat free

Lately I’ve been getting a lot of questions on both the blog and our Facebook community about the difference between a wheat-free diet and a gluten-free diet.
I felt I needed to elaborate on the answer to this question. It is a longer answer than can be said in the comment section.
First off, I am gluten-free!
I was diagnosed with Celiacs disease 5 years ago, and thus a strict gluten free diet is my new life plan.
With my diagnosis came mixed reactions to packaged gluten free foods and a desire to bake really good gluten free foods. (That’s what Wheat Free Mom is all about: just because you’re gluten-free, DOESN’T MEAN your food should taste anything less than delicious!)
That is how this blog happened. I was frustrated at times and so happy at times and wanted to share this with you all.
When I found a gluten free recipe that tasted so good, I wanted to weep, and sharing these with others has been a blessing for me. I knew others were out in this world like me.
They too, wanted to make a warm batch of gluten-free muffins….

A chocolate dessert to wow your company (gluten-free cupcakes)…

A pile of gluten-free buttermilk pancakes for Sunday morning

So I started the blog Wheat free Mom with my son back in August 2009. (Crazy how far the blog has come!)
Why wheat-free and not gluten-free?
Simply: gluten-free mom was taken and so I became Wheat Free Mom.

First off, they are NOT the same.
Gluten is the protein found in many grains including wheat, rye, barley, spelt and oats.
Celiacs disease is a medical condition, an autoimmune response to gluten.
If you have Celiacs disease even a small amount of gluten is harmful. It damages the surface of the small intestine resulting in poor absorption of nutrients (protein, fat, vitamins and minerals) which are necessary for good health.
The treatment for Celiacs disease is a strict adherence to a gluten-free diet for life!

Basically… avoiding all products that list wheat as an ingredient.
Some ingredients are obvious, such as wheat, wheat bran and whole-wheat.
Less obvious ingredients are couscous, bulgur, semolina, durum and kamut.
Rye, spelt, barley and Oats are wheat-free but not gluten-free.
My recipes are all gluten free, which means they are also than wheat free.
Most wheat-free recipes contain some sort of gluten so they are NOT gluten free.
A food labelled “wheat-free” is safe for someone with a wheat allergy, but NOT for someone with celiacs disease or gluten sensitivity.
This is why it’s INCREDIBLY important that you take time to educate yourself on the differences AND the various ingredients to watch out for. It’s also a great reason to focus on non-processed foods and to cook for yourself as much as possible so you can ensure your meals are going to be clean.
I feel like I’m getting long winded in answering the question.
Simply: Gluten-free will be wheat free BUT wheat free will not be gluten free, unless it is labelled gluten free.
For me, I have a medical condition called celiacs disease, and for the rest of my life I will be following a gluten free diet. I am extremely sensitive to gluten so I am very careful where I eat and what I eat.
I appreciate all the discussion lately about wheat-free and gluten-free and I hope I’ve answered some of the questions. Again, I am not a doctor so please consult a doctor regarding your health issues.
Our bodies are all unique and what one person can easily digest is not necessarily the same for someone else.
Ask questions and seek professional medical help if you are having any health issues.
Lastly, again, ALL recipes on Wheat Free Mom will be both gluten and wheat free.
P.S. Congratulations to Kristin who won the latest giveaway!

Gluten free Cake Pops. Have you seen any out there? Have you found recipes for gluten free cake pops?
I bet you have seen cake pops everywhere… like Starbucks, but no gluten free ones, right? I scoured the aisles of cookbooks the other day at Chapters and not one of the cake pops books had any gluten free versions. Why?
Well today I solve that issue. Here is a recipe for gluten free cake pops that I hope you will be happy with. They are not hard to make, they just require patience as there are a lot of steps to be followed. Because there are a lot of steps, I am not going to write a long blog for you to read today.
Here is the recipe.