I’ve been on a waffle kick lately.
Recently I posted the PB & J waffles, also have buttermilk waffles, Double chocolate chip waffles, and salted caramel waffles.
Waffles allows one to get creative. Why do the basic butter and maple syrup when you can expand the layers of flavors and combos?
I’ve also decided to do more recipes using Bob Mill’s All Purpose GF Flour and Thomas Keller’s Cup4Cup GF Flour. Not everyone has jars of all the different gluten free flours available. (Teff flour, Potato Starch, Cornstarch, Potato Flour, Amaranth Flour, Millet Flour, Sorghum Flour, White Rice Flour, Brown Rice Flour, Quinoa Flour, Bean Flour.)
That can be a lot of jars of flours to store, also some of these flours are hard for people to get a hold of. So, I’m going to do some playing around with recipes and post recipes over the next month using Bob Mill’s and Cup4Cup.
I’m also going to be doing a major kitchen renovation this summer. This means I will be without a kitchen for at least 6 weeks. Not looking forward to not having a kitchen but I am really excited for the end result. I figure I’ll do a lot of baking until then, so you’ll be getting cookies, cakes and brownie recipes.
Any requests?
I really enjoyed these pumpkin waffles, the additions of cinnamon, nutmeg and cardamon reminded me of fall and pumpkin pies. 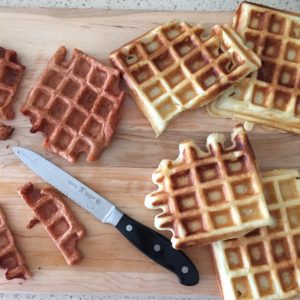 I served the pumpkin waffles with maple butter and nutmeg whipping cream, here are those instructions.